As I mentioned in yesterday’s post, the cabinet for the benchtop router table for Steve Ramsey’s “Powered Up” online course was bowed out on both the top and the bottom, and I wasn’t sure what to do. I was “stuck”. 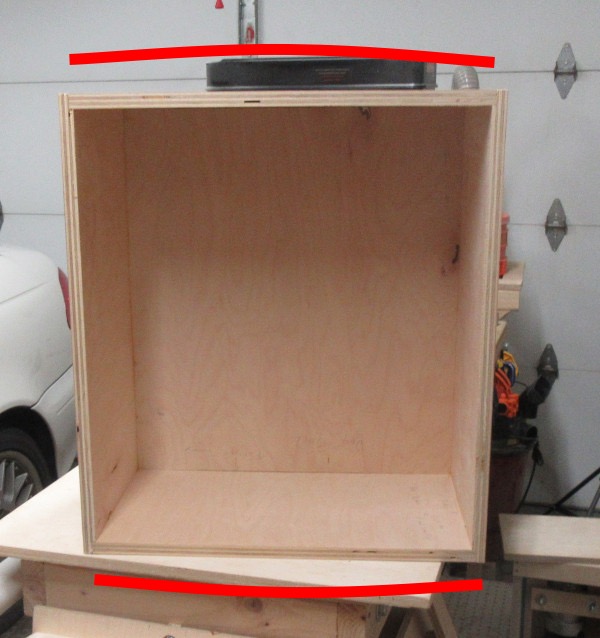 As the title of this post indicates, I’m not stuck anymore. I decided to sand the top and bottom until they were flat enough. 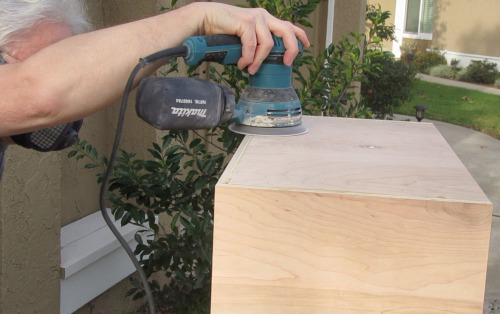 I decided to do the sanding outside, because I knew there’d be a ton of sawdust in the air.

First I tried my random orbital sander with 80 grit sandpaper, although I didn’t have high expectations. 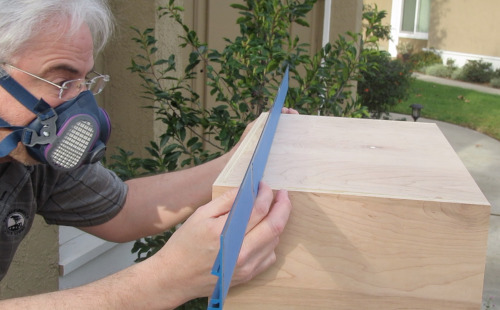 I have a straight edge that I only use for checking if things are, well, straight, so it got a lot of used today. 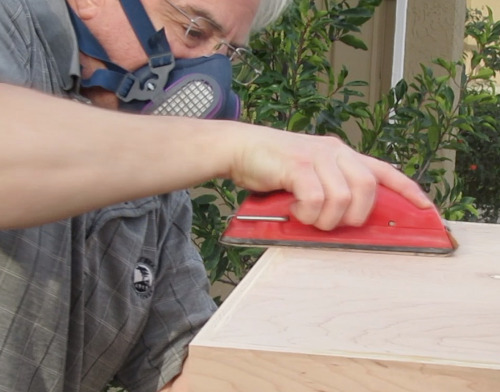 Then I tried using 40 grit sandpaper, and my favorite sanding block, a “Preppin’ Weapon”. It actually worked better than the random orbital sander. But as I suspected, it was too slow. 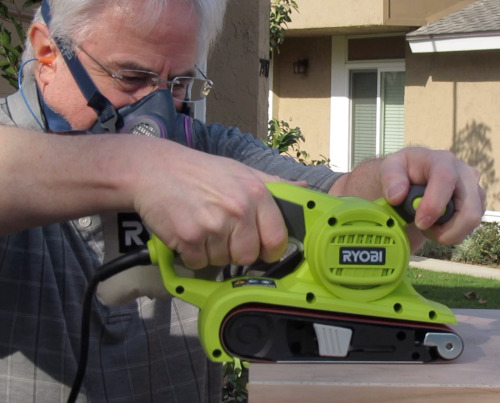 So I went to Home Depot and bought this portable belt sander, and some 60 grit sanding belts. It worked well enough, and eventually I got both sides flat enough. 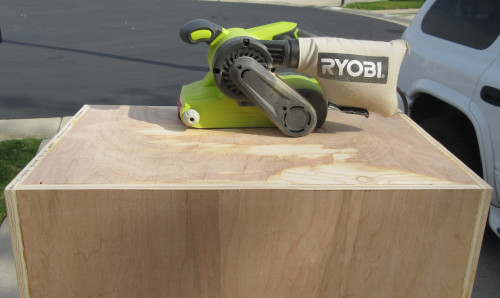 When I bought the sander, I was all prepared to do a whole Al Pacino thing with “Say hello to my little friend”.

But I don’t like the sander enough for that. It had “hot spots”, and it was really hard to get a consistent surface. So I’ll be taking it back. 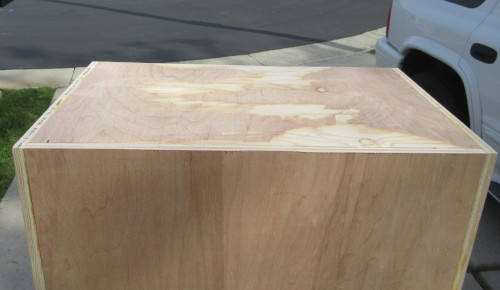 But as I said, it did well enough, since the top will be covered by the melamine top, and the bottom is, well, the bottom.

Almost did another “Dan” 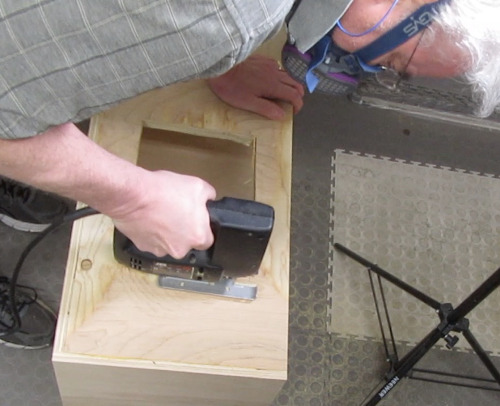 Next I cut out the hole in the top where the router will be. 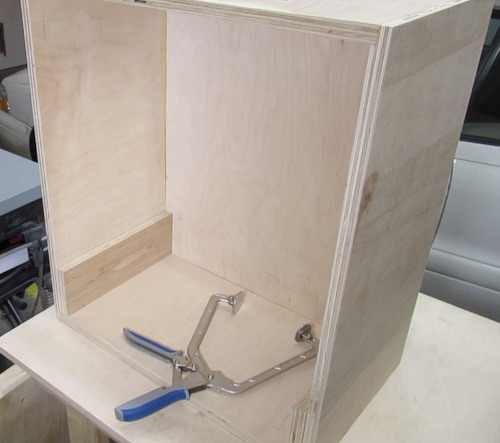 I was getting ready to glue up the drawer risers… 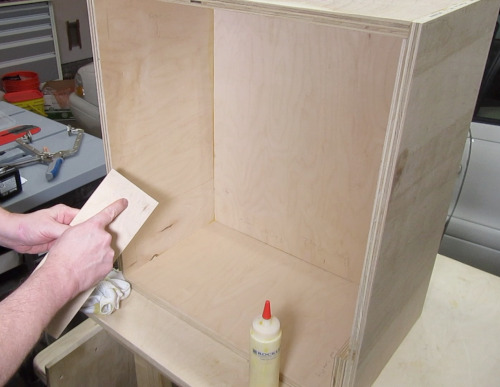 When I noticed a note I had written on the riser. Unfortunately you can’t see it in this pic, but it was reminding me I still needed to cut the risers to their final width.

I was celebrating inside, and I was already planned my blog post saying how today was a virtually mistake-free day. Yeah, right. 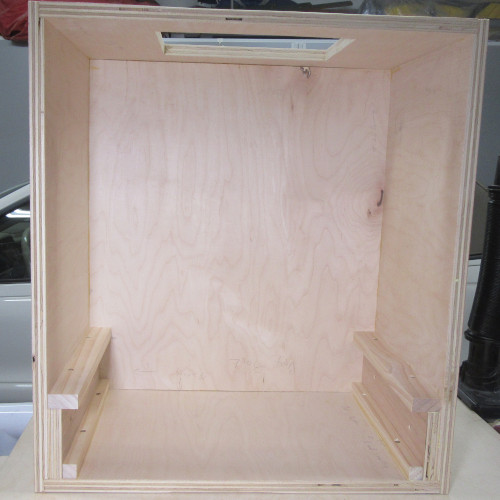 I got all the drawer stuff installed without any issues.

I was ready to install the drawer shelf… 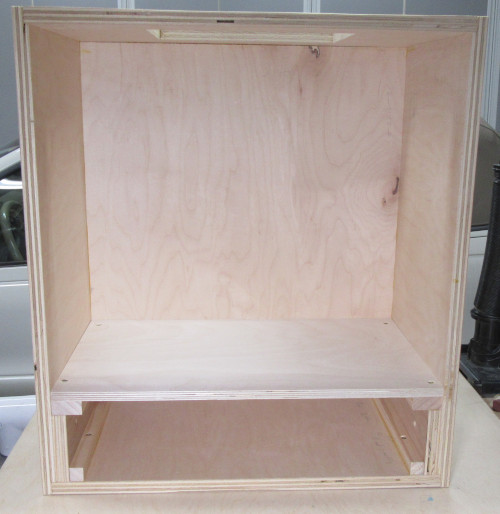 …when (and I don’t have a picture for this) I discovered I had cut the drawer shelf too small. But since I didn’t actually make the mistake today, it’s still a mistake-free day.

I made a new drawer shelf out of some scrap plywood. So far, so good. 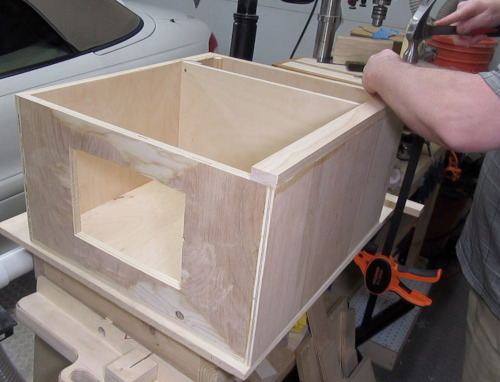 I was gluing the first face stile on, and I decided to use brad nails like Steve had shown, instead of clamps.

(The clamp in this picture is only holding the stile in place until I drive the nail in.) 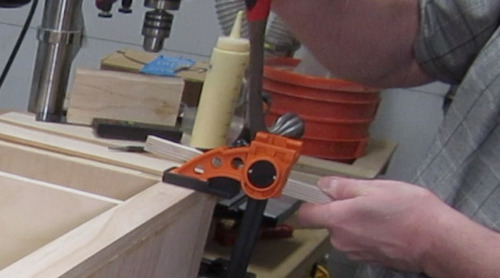 Silly me. I had forgotten the fact I can’t drive a nail straight, to save my life.

So much for a mistake-free day.

But I’ll get it done eventually. Not in time for me to get it in this blog post, though.