I just released my latest video on my StupidStop, and I thought I’d share some of the “fun” stuff that happened along the way.

If you haven’t seen it (or even if you have), watch this opening “Jaws”-type clip (it’s 28 seconds):

When I first uploaded the video, I used the original Jaws opening theme music (30 seconds):

Using the Jaws theme was a calculated risk, but I thought I could get away with it because of the table saw sound covering most of it. Nope. I received this email almost instantly when I uploaded it: 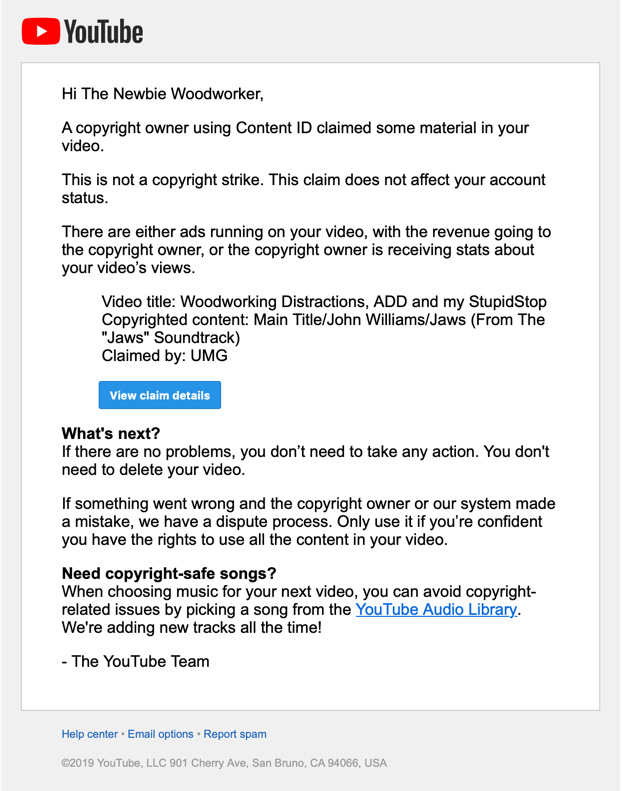 Fair enough. I’m using copyrighted content, so that’s what I get. There’s no real way to get permission to use the theme, so I took a chance.

As the notice says, no damage done. But if I published the video, the copyright holder would get all ad money from the video. Not the end of the world, but obviously I’d rather not give them my money.

The great thing is, they notified me instantly, even before I “published” the video. So I was able to take it down before any of my subscribers were emailed about the new video.

There’s other ways for a video to get copyright-claimed, but this is the most common.

(In case you’re wondering, I posted the above clip with the Jaws theme to my other YouTube channel, which isn’t monitized, so I don’t care if they copyright-claim it or not).

So now I had to figure out how to replace the Jaws theme, and still keep the general feel of the clip. I tried YouTube’s free library, and a bunch of other places, but I couldn’t find anything with enough bite. There just isn’t any way for that clip to work without that music. (Hence the “Gums” poster above).

Then I stumbled across a website called POND5, and this search produced a clip called “Shark Attack”, which I ended up using in the video. It cost me $25, and if I knew I was going to have to spend that much money when I started the video, I don’t think I would have done the Jaws bit, but at this point, I didn’t want to remove it. Chances are reasonable I’ll cover the cost with ad revenue, but it’s still $25.

The great thing about the “Shark Attack” sound clip is, it was almost the exact same duration and dynamic as the original theme, so I was able to drop it in and have it working in 5 or 10 minutes.

I used some movie clips in the video that could, in theory, get copyright-claimed, but they’re short enough that I’m not too worried (knock on wood).

There was one clip I used, which oddly enough is another ocean-based movie 😜, where I was going to use the jazzy-sounding audio from the soundtrack, but it was long enough I thought it might get claimed, so I replaced the audio with something from YouTube’s free library, and I think it’s just fine.

I don’t normally include these kinds of things in my woodworking videos, and I think it’ll be a while before I do it again. I always have movie clips running through my head that would fit in well, but it’s just not worth the effort, especially considering the potential that I’d have to remove the video.

It’s too bad, really, because I just LOVE doing this kind of thing, but I suppose my woodworking channel’s better off without it. But if you want to see what I mean, check out this video I made, on my other YouTube channel. Like I said, I just love doing stuff like this:

It’s got closed captions you can turn on and off, if you want the words, or don’t.

Every once in a while I put effort into something in a video that I know probably nobody will notice. But I do it for me, because I enjoy it. And I think that it often has a subconscious effect, even if you don’t realize it (which is redundant, I know).

In the Jaws bit, I used a still-image technique called the “Parallax Effect”, also known as “2.5D”. It’s where you take a still image and split it up into multiple layers, and move or zoom them differently to give the impression that you’re not looking at a regular flat picture. You see it all the time on TV, but you may not have noticed it.

Here’s really short an example, so I repeat it 3 or 4 times before the clip ends:

The table saw looks like it’s coming towards you a little, and the router table and car in the background are moving slightly away. It’s an homage to a scene from Jaws which uses what’s known as a “dolly zoom”.

I didn’t do it to that degree, and I didn’t mess with the focus, because it’s something you do right at the climax of a scene, and I could only do it near the start, so I had to be more subtle. But it makes me smile anyway.

By the way, here’s a music video I made quite a while ago demonstrating the “2.5D” effect. The opening shot is one picture that I cut into layers, and it’s totally effective. I love this video, even if I did make it myself. And no, it’s not monitized, so I don’t care that it’s copyright claimed (assuming it is).

The time I spent on this Jaws clip reminds me of The Hamster Factor, which is a fantastic documentary about Terry Gilliam making the movie “Twelve Monkeys”. If you ever want to see what a director goes through making a movie, including almost going insane, watch this documentary.

Anyway, the title comes from a 5-second (or thereabouts) scene in the movie that has a hamster in a wheel, and the hamster wouldn’t move, and it took forever to get the shot. The thing is, even though I know the hamster is in that scene, it’s almost impossible to tell. So it was a lot of time and money for something probably nobody but the director cares about. Like I said, I can relate.

I also did the “2.5D” thing at the very beginning of the last video, and even though nobody noticed it, I don’t care. I’ve done it in a few other videos before, also. Just for me. And now, maybe you’ll notice it in a future video!