Let’s go sleuthing! We’re going to uncover the secrets of a SawStop brake, like how it knows if the blade touched your finger or just a nail. And we’ll discover that it’s not as simple as we thought. So if you think you know everything there is to know about how, when, and why a SawStop brake gets triggered, Wait! There’s more!

No, I’m not actually going share industry secrets 1. But I am going to delve into details you’ve probably never thought about before.

This post is the result of a lot of research, debugging, testing, and general sleuthing I’ve been doing over the past 10 days(!), as well as multiple phone calls I’ve had with SawStop personnel. If you haven’t been following along, this all started with an issue I had with the the Infinity Throat Plate and my SawStop PCS.

I highly recommend not skipping a section as you read along, because even if it’s something you think you already know, I’ve sprinkled in some goodies you probably don’t know.

NOTE: Although this is article is fairly detailed, I’m not trying to cover every possible scenario.

If you don't know anything about SawStop safety technology, watch this short video first. (Less than 2 minutes.) 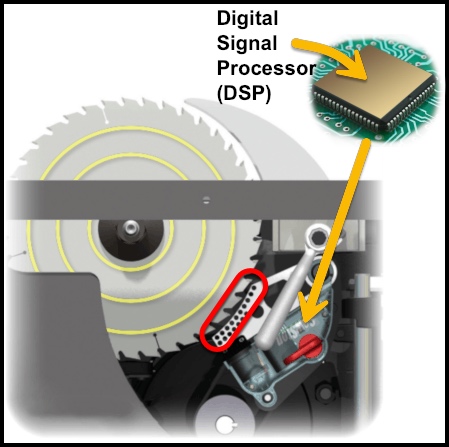 When the power to a SawStop saw is turned on, the saw sends a small electrical signal through the arbor into the blade (yellow circles). It does this even when the motor isn’t running.

A digital signal processor (DSP) inside the brake cartridge is monitoring the signal for change.

It monitors the signal from across the gap between the brake and the blade (red circle) 2.

You probably already know this, but bear with me. The SawStop saw can be in one of three different modes:

As mentioned earlier, the DSP monitors the electrical signal for change, but be aware:

The amount the signal changes can vary significantly 3. This is an extremely important concept, which we’ll learn later on.

Here’s some things that can affect the electrical signal:

Obviously the main purpose for the signal is to help detect if the blade touches flesh, like a finger. And since our bodies are basically large capacitors 4, contact with them will certainly have an affect. To both us and the signal!

If the blade makes contact with metal, it will change the signal. If we’re touching the metal, the change will be much greater.

But did you know that even close proximity to metal can change the signal to some degree? Well, it can. We’ll talk more about this “proximity effect” shortly, and you’ll see the proof for yourself.

Any other kind of conductive material can also cause the changes to the signal.

I’ll discuss how the DSP decides whether to take action or not, in a moment. But I want to quickly cover some of the actions it might take.

So, when I use a phrase like “take action”, this is what I’m referring to.

OK, something has caused the signal to change. Now what?

This is where SawStop makes its money, so to speak. I’m sure the logic and signal processing they do is a closely guarded secret.

As I said before, I’m sure it’s more complicated than this. But this will do for now.

What happens if you hit a nail? The signal drops a little, but the DSP decides it isn’t enough to be a person, so it doesn’t do anything. 5

And if you hit more nails right after that, the DSP may decide “I don’t want to take any chances, this might be a person, so take action”. 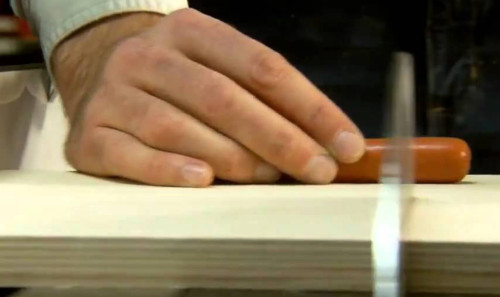 What happens if you touch the blade?

The signal drops a lot, because your body can conduct a lot of electricity.

So the DSP says “HOLY CRAP!” 6 and takes action. 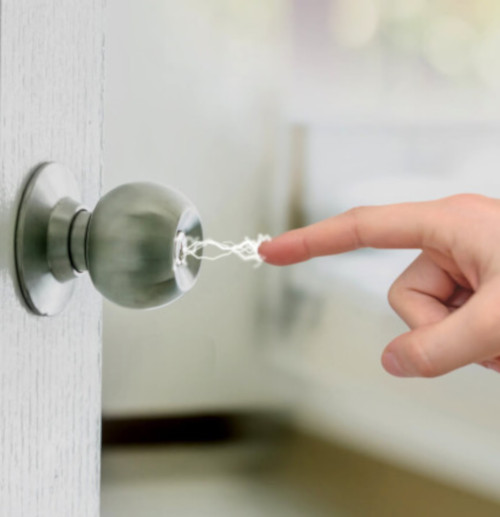 As I mentioned earlier, if metal is just within close proximity to the blade, it can affect the signal 7.

If that’s hard for you to believe, don’t forget that the DSP monitors the signal across the gap between the blade and the brake, without needing to be in direct contact with the blade (good thing).

And if you’ve ever been zapped with static electricity by a door knob, then you’ve probably already experienced the proximity effect 8.

But neither of those explanations matter, because we can demonstrate the effect, which you’ll see in the next section. 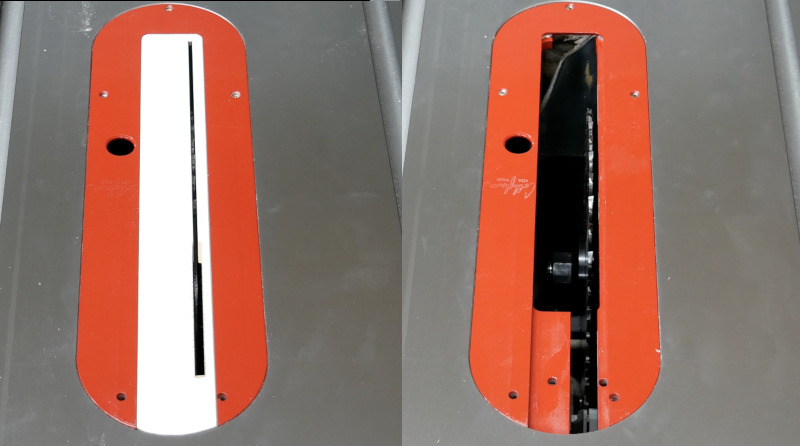 And this is where it gets interesting.

NOTE: When I talk about how long the red light flashes, understand that it can vary, and it doesn’t always work the exact same way every time.

On the advice of many people on the SawStop Users’ Group on Facebook, I bought the above Infinity Throat Plate. And something happened right away that had me wondering.

It didn’t take long for me to discover an extremely odd problem that started me on this week-and-a-half-long journey.

Depending on a lot of different circumstances, sometimes when I was using the Infinity plate and I raised the blade, it would trigger the “Contact Detected During Standby” warning light pattern, which I’ll refer to as the flashing light from here on out.

It never triggered the brake, because I never got this while running the motor. But that doesn’t mean it couldn’t, although let’s leave that discussion for a little later 9.

Here’s some things to note, so I don’t have to spend a lot of time on them. This article is not a proof, so just take my word for these things. Or not.

So, here’s some of the ways the issue manifests itself, and then I’ll discuss what I think is happening.

Case #1: Raising the Blade Fast, with a Sled

When I use one of my cross-cut sleds with the Infinity insert, and I raise the blade up quickly, I get the flashing light. In this case, it usually flashes for 20-25 seconds, but if you’re not looking for it, you may not notice.

Case #2: Raising the Blade Fast, without a Sled

As I mentioned before, at first I thought I could only duplicate the problem when I used my cross-cut sled, so I spent some time down the rabbit hole of trying to figure out what was wrong with my sled.

But it turns out it’s just easier to duplicate with the sled. Without the sled, I have to raise the blade quickly and usually almost all the way up before I get the flashing light.

So I'll use a sled for the rest of the examples, but as I said, you *can* duplicate them without a sled. It's just a little more finicky.

If I raise the blade slowly, and stop as soon as the I get the flashing light, the light stops flashing much more quickly. I can keep repeating it if I’m slow enough.

This case happened while I was creating these short videos. In this clip, it took WAY longer than 20-25 seconds for the light to stop flashing. I had no idea why. But as I was typing this section of this article, I had a brainstorm.

I wonder if, when I touched the sled, it restarted the DSP’s internal timer. So I started my timer after I released the sled:

And yep, that's exactly what happened.

Case #5: Raising the Blade Slowly without a Sled

This final case shows that if I raise the blade slowly, without a sled, the light never flashes. I can do this with a sled also, but I have to raise it excruciatingly slowly, so I won’t subject you to that torture.

So how do we account for what we’ve just seen? Let’s see if I can make sense of it.

First of all, whatever effect the insert plate has on the electrical signal, it’s apparently different from the effect that touching flesh produces, so it seems like a different set of rules applies. Or else it’s the same rules, but since they’re being applied to a smaller effect, the rules produce different results.

When the blade is all the way down, not much of the blade is near the kerf, so there isn’t much change to the signal. As I raise the blade up, a wider and wider section of the blade passes through the kerf. And with more surface area in proximity, the effect is greater.

So let’s look at some of the cases mentioned above.

How Come Nobody Notices This?

My theory is this:

And this is when I wanted to crawl in a hole:

I had some more ideas, and I wanted to test them. So I tried to duplicate the issue while running the saw in bypass mode.

Guess what? I couldn’t get the warning lights when running the saw in bypass mode. No matter what I tried.

And if the warning lights won’t happen in bypass mode, there’s a 99% chance that this issue will never trigger the brake, when running in normal mode.

Which means that yes, I sort-of tricked you into reading an article that’s probably not going to help you in the least.

But hey, what would you have done?