I mentioned in yesterday’s post that I bought a new SawStop PCS (Professional Cabinet Saw), but I didn’t have a lot of time to elaborate. So I’ll bring you up to speed here, even though I still have a lot of assembling left to do. But if I wait until later tonight, I’ll be too tired to write.

A little bit of this will be a repeat from yesterday’s post, but since I only wrote a paragraph yesterday, there’s not much to repeat.

I ended up buying the 1.75hp SawStop Professional Cabinet Saw with the 36” top and T-Glide fence. 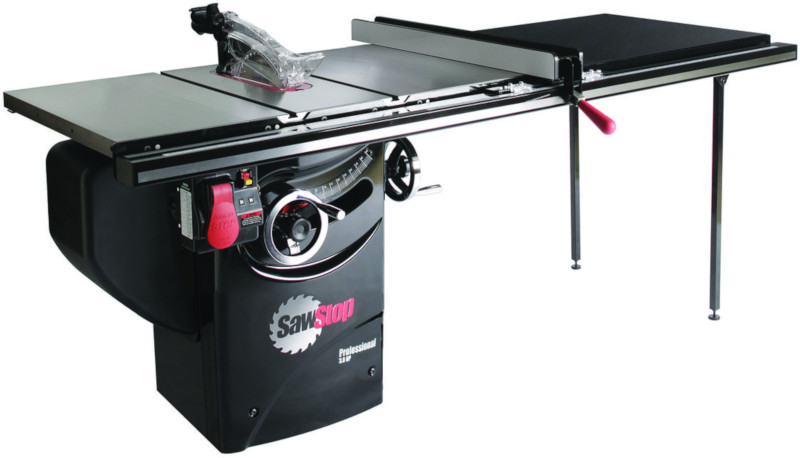 I don’t think I need the 3hp model, and it’s something like $450 more. I don’t have room for anything bigger - I barely have room enough for this.

SawStop has a deal this month, where if you buy a PCS, you can get a free Integrated Mobile Base: 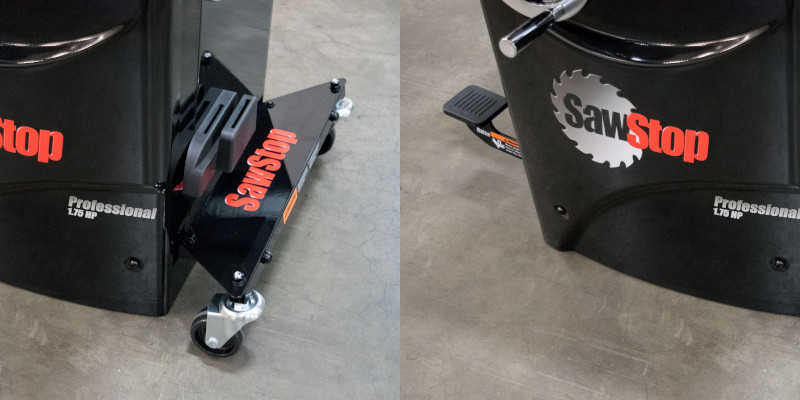 or a free Overarm Dust Collector: 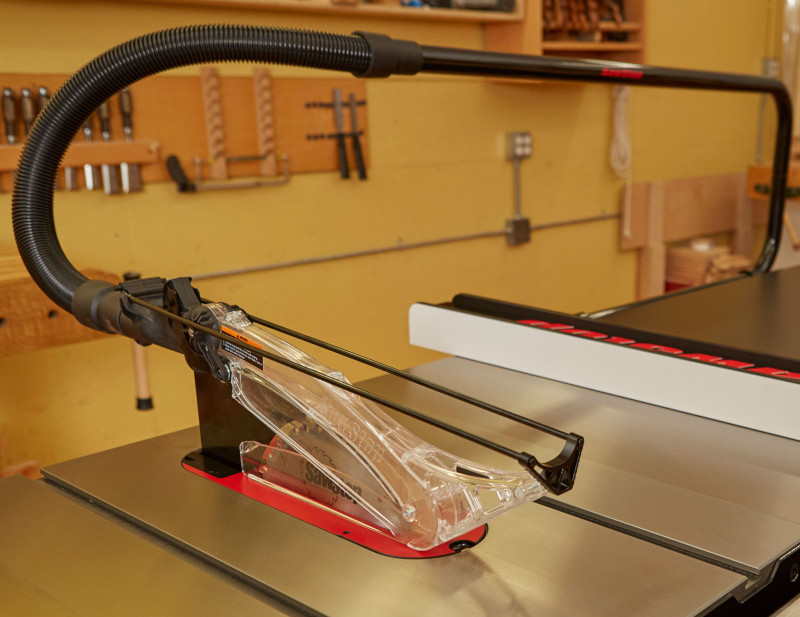 I didn’t want that version of the overarm dust collector. If I ever get one, it’ll be the Floating Overarm Dust Collector. And I need wheels, so the decision was a no brainer - I wanted the mobile base.

The problem is, SawStop won’t give you the free mobile base until after you buy the PCS. Once you get the PCS home and fill out the form with the serial number of your saw, they’ll ship the base to you. So that means you have to keep the saw in boxes until your base gets there.

I’m on the SawStop Users’ Group on Facebook. One of the members mentioned that they work at a Woodcraft store, and they will send you home with the saw and the base, all together. They buy some extra bases and basically give them to you, then they fill out the rebate and SawStop sends them a new base.

So I called the Woodcraft in Fountain Valley, CA, and mentioned the problem, and before I could say anything more, they told me about how they’d send me home with a saw and a base. So I took them up on it, and paid for the saw that evening (it was right before closing).

The next day (yesterday), I went and picked it up. And let me tell you, the owners there (I assume they’re a married couple) are the nicest people you’ll ever want to meet.

So the guys at Woodcraft used a forklift to load everything in my SUV: 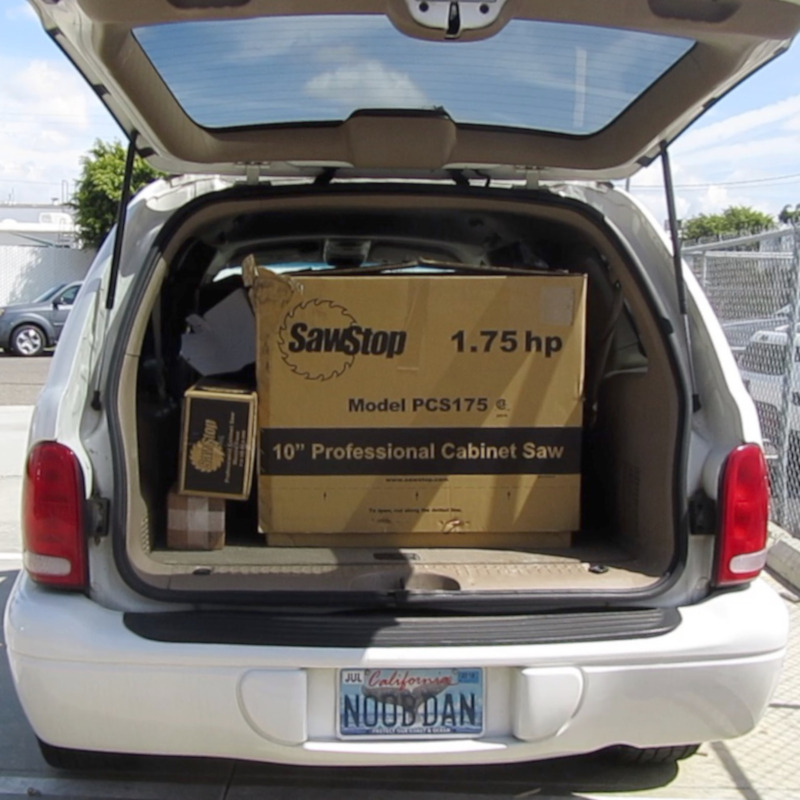 I unloaded all the boxes except the cabinet, which is very heavy (more on this below). I had to wait until today to get help unloading the cabinet.

For anybody who wants to know the box dimensions, here they are. I rounded up to the nearest inch: 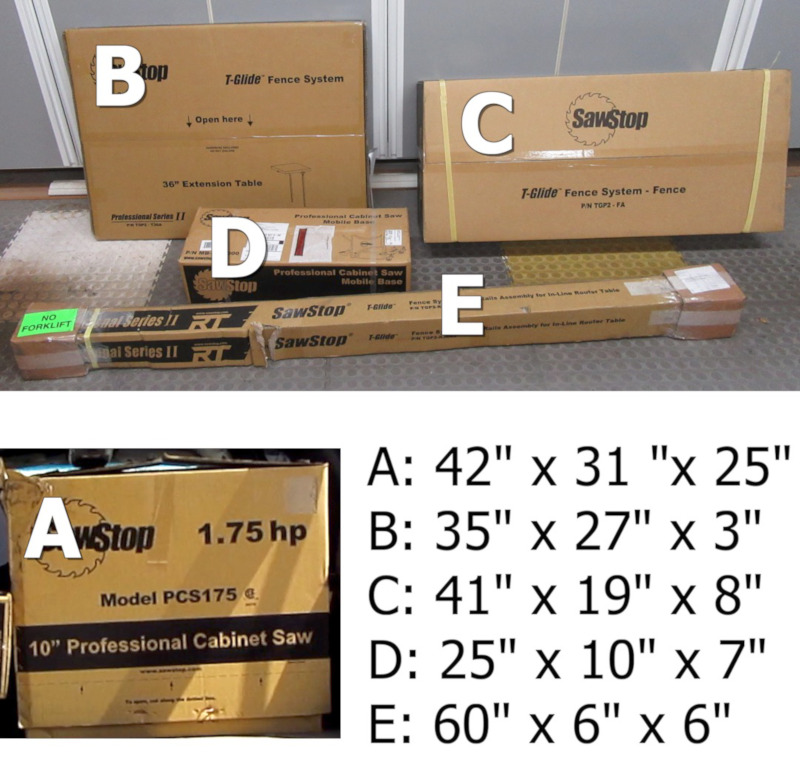 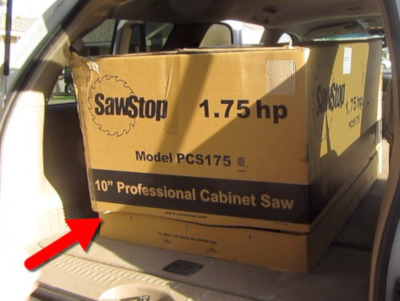 So I cut the box along the dotted line, and cut the back also… 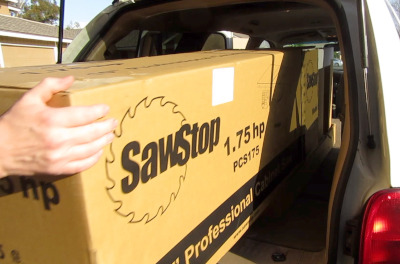 …and removed the box top. 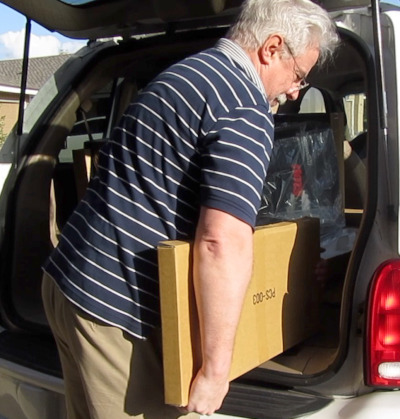 Then I removed everything from inside the box that I could.

This is one of the cast iron table wings, and I’m thinking it’s 30 or 40 pounds all by itself. 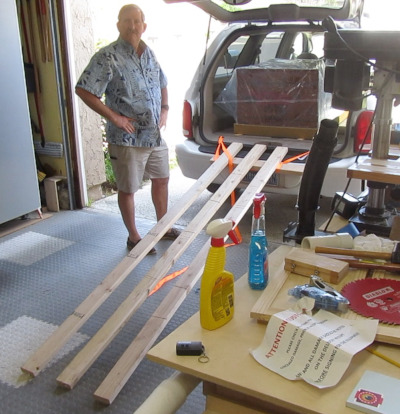 My wonderful friend Scott came over with his wife, Pamela, and Scott helped me figure out how to get the cabinet out of my SUV.

Funny story. He said “Can’t we just lift it out?” I said “Go ahead,” and snickered. Let’s just say that you have no idea, none at all, how heavy this mofo is.

So we rigged up these 2x4s and tied them to some hooks in the back of my SUV, so they wouldn’t slide off. 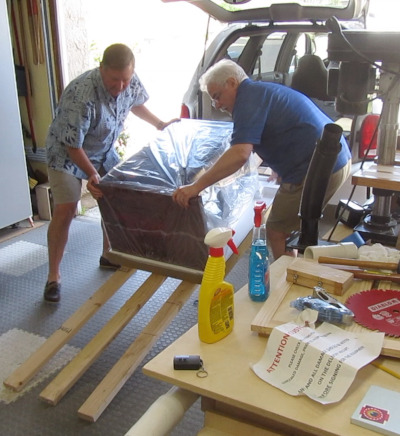 We managed to get the cabinet out of the car without incident, which is a miracle. Those of you who follow my blog regularly would understand this.

We actually managed to get the base installed, but I’ll save that for tomorrow, because I’m not even close to finishing assembly yet, and I’d like to see if I can get some more done tonight.