It’s kind of surreal to see my “SawStop Saved My Thumb! What Happens Next?” video get so many views so quickly. The last I looked, it was over 113,000 views in a about 3 weeks. That’s kind of crazy, at least for one of my videos. That makes it my 5th highest viewed video, and the other videos have been out for way longer.

SawStop Saved My Thumb! What Happens Next?

I should point out that I’m not positive that it’s the 5th most viewed video, because YouTube has some work to do on the beta version of their new YouTube Studio. Here’s the top portion of the list, sorted by date:

Well, I guess it’s not just the beta version, because here’s the current (non-beta) version, and it has the same issue:

Anyway, for me, it’s kind of cool to get that many views so quickly, in spite of the subject.

Awhile back I was talking about trolls leaving comments for the aforementioned video. Here’s a typical comment:

If you’re too stupid to not put your thumb in the blade, you should sell all your tools.

And while I laughed about it, it turns out they may be right, but not about my tools.

I was hanging some lights in the back patio, when I tried to step from the ladder to the short fence. It was a stretch, and if I weren’t an idiot, I’d have stopped and just moved the latter.

But since I apparently am an idiot, I tried stretching to the fence. The result was as expected. The ladder went flying, and if I wasn’t able to hold on to one of the beams above the patio, I might have broken my neck.

If I’m that stupid, maybe I should sell the ladder.

And of course, I ended up hanging in a rose bush, so now I’ve got annoying scrapes on my legs. Serves me right.

I don’t need a SawStop, I need a StupidStop™. 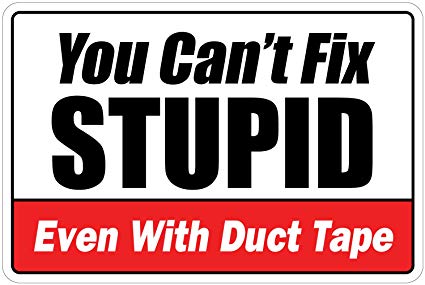 Tomorrow, I’ll get back to work on the Powered Up projects. Yay!