Older: "SketchUp Model for my Rip Fence ..." Newer: "Probably no more Plans from me..."

One of my viewers asked a question on one of my videos, and I had trouble answering it. By the time I was done writing a reply, it turned into a novel, so I thought I’d turn it into a blog post. It might even turn into a future video.

Hey Dan, Thank you for another quality video. I noticed that you only used a single runner vs the two runners that 95% of the other cross sled videos show. Is there a reason for that? I understand “Why use two, when one will do”. But is that your reason or is it something else? Keep those videos coming. Thanks.﻿

Here’s my reply, which as I said turned into a novel. And don’t forget that I’m just some guy who makes YouTube videos, and I could be totally wrong, so I invite your comments!

Thanks for the comment. I have to laugh - it’s taking me a while to write this reply. Up until now, whenever I thought about using only one runner, I thought the explanation was simple and fairly obvious. But since I’m having trouble explaining it, I guess I was wrong.

I’m not against using two runners, but I definitely think that if one runner will do, why use two?

I’m thinking that using two runners is a little more complicated than just throwing a second runner on the base. For one thing, two runners are harder to get sliding smoothly, without binding in the miter slots.

But I would also think that using two runners doubles the affects of expansion due to weather conditions, so it would be much easier for them to start to bind when it gets hot/humid.

Then, when expansion does happen and you sand them down a little, then it cools off, I would think the sled could start to have some side-to-side play, which again might be doubled due to dealing with two runners. Who knows, maybe not?

In any case, it probably wouldn’t be bad, but I would think it could still be an issue, although since I live in Southern California, I don’t know if I would ever experience it or not.

I’d use screws when attaching 2 runners

If you attach the two runners with screws, which personally is the only way I’d use two runners, then I would think that a lot of time you could just loosen one of the runners a little and tighten it back down, and that may stop the binding. However, never loosen both at the same time, or you can throw the alignment of your rear fence out of whack.

Here’s how to attach runners using screws – this is for runners for tabbed miter slots, but it works just as well for normal runners:

When & Why I use one runner 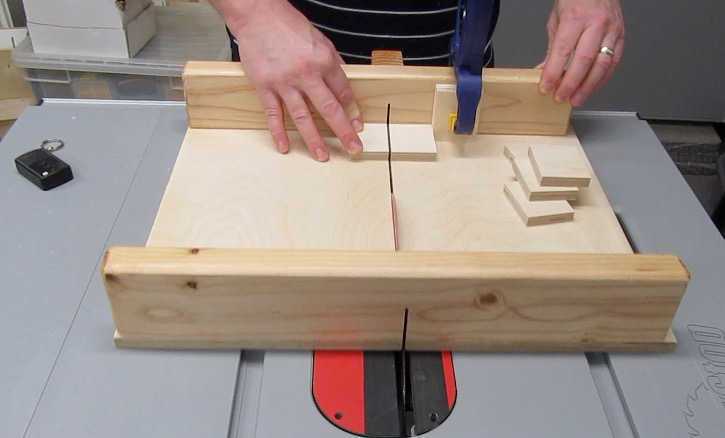 With these smaller sleds, if I make a runner that fits well in the slot with no side-to-side movement, and the sled slides smoothly with no binding, then I don’t see the need for more than one runner. It works just fine. There’s no real tendency to twist, or anything like that.

And even if there was a tendency to twist, I’ve usually got one hand holding the stock, between the runner and the blade (see above picture), and I’m using it to assist in pushing the sled, so that would offset any tendency to twist.

And even my large sled only has one runner, but it’s a long runner that runs the entire depth of the sled base, so it’s not going to be moving side-to-side at all.

If I made a sled that’s a lot wider than it is deep, then I’d consider using two runners. Like my box joint jig, for instance, which is wide but not very deep. And it’s also heavy, especially when cutting multiple pieces of stock. So it can drag quite a bit, which makes it really want to slide unevenly. So for it, 2 runners are a must.

So, thanks to Ray for the question, and giving me a chance at thinking this out.

Please leave a comment if you have questions, criticisms, suggesations, etc. Thanks!

Older: "SketchUp Model for my Rip Fence ..." Newer: "Probably no more Plans from me..."