Older: "Dust Collection with Many Drops" Newer: "YouTube Thumbs Down"

This is the saga of my trying to buy a decent Brad Point drill bet set. Eventually, I ended up with a fairly decent set of bits. But it didn’t start out that way. Let me tell you the story…

This was my first set of Brad Point drill bits: 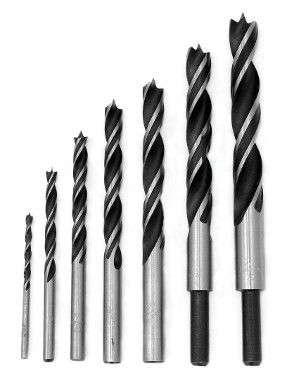 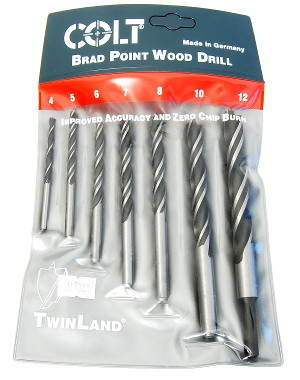 I don’t have a link for them anymore, but you can find them if you look around. Search for “twinland brad point set”. They work really well, with no wobble, and got me hooked on brad point bits.

But there’s only 7 bits, and I wanted the entire range of bits.

So I did some searching for larger sets. I always look for products with a large number of customer ratings, because that gives me a better idea of what to expect.

I didn’t find any sets with consistently high ratings (4.3+ stars).

Since I have a Rockler store near me, I went to Rockler’s web site and found this 5-Piece HSS Brad Point Bit Set: 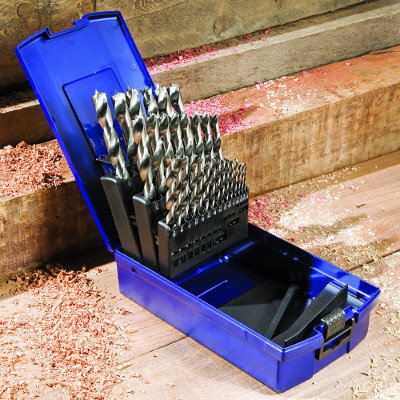 It did not have great reviews, but I looked closer to see what people complained about. The vast majority of complaints were that some of the bits wobbled.

Since I have a Rockler store near me, I had an idea.

I went to my local Rockler store and talked with a sales person. I asked if I bought this set, and I found some bits that wobbled, could I exchange them?

He said “sure, just bring the set back and we’ll exchange it.”

I told him that’s not what I wanted. Just replacing the entire set was no guarantee I’d get a new set without wobbly bits. So I said I wanted to bring it back, and cherry-pick bits from other sets until I had a set with all straight bits.

He said there shouldn’t be a problem with that, so I bought the set.

I took the set home, and immediately put each bit in my drill press and spun them up, to see which ones wobbled.

It’s the in-between ones that are hard to identify. I don’t expect perfection. So the question is, how much wobble is acceptable? After a while, you get kind of blurry-eyed.

Anyway, I put painters tape around each bit I wanted to replace. If memory serves, there were 10 wobbly or questionable bits.

I called the Rockler store to ask them when was the best time to come in and look for new bits? I made sure to speak with the manager. When I told him what I wanted to do, he said he couldn’t do it. He said there was no way for hime to send the individual bad bits back to the factory.

At first I was ticked, but I did something completely unexpected - I didn’t start arguing/yelling. I know. Unbelievable, right?

Instead, I thought about what he said, and I addressed that. I said that of course he could send them back. Just put all the bad ones in one set, and return the entire set.

He thought about it, and agreed. Yay me!

So I asked him when was the best time to come in, and I went in the next day.

The manager wasn’t there. Of course he wasn’t there. Why would it go smoothly now? Fortunately, I was in a super mellow mood, so I was going to solve every problem I faced without losing it. And I did! That’s hardly ever happened before. Anyway, I digress…

The lead store person said there’s no way someone could spend the time to help with this. But I know this guy - I’ve talked with him a lot, and he’s really cool. This was an unusual response by him, and he seemed kind of harried. So I calmly talked with him and told him the manager assured me that “one of his people” could help me.

Eventually the guy agreed, and a little while later, he actually apologized to me. He said they had just finished being really busy, and he was just frazzled. I said I understood (and I do - I’ve worked in customer service before), and it was no problem. We both went away feeling pretty good about the other person. That’s how we should all treat each other, although most of the time I’m just a dick.

Anyway, I got with a different sales person, and we went through the set literally bit by bit. He was great about it, and totally agreed about the wobbly bits. Well, most of them. Some of the ones I wasn’t sure about, we both decided they were good enough.

We found replacements for all of them except two, and I realized these two were sizes I had at home in my original 7-piece set, so I knew I could use those.

So I brought the set home, double-checked the bits, and everything’s OK. Well, truthfully, there’s still two bits that wobble more than I’d like, but perfection is unattainable. Fortunately, they’re two of the largest bits, so it’s less likely I’d need absolute perfection in those than smaller holes.

So now I can say that I’m very happy with this set. The box they come in is outstanding, and you don’t have to skewer yourself to pull out a bit, or put it back in.

So, I don’t recommend this set, unless you can do what I did. But if you can, then by all means do.

Here’s the really odd thing. On Amazon, the Rockler set does actually have decent customer reviews. But there’s only 17 ratings, so that’s probably the reason. There’s one rating where the guy said he’d give them a minus 5 if he could, and he said he knew exactly where he could stick some of them, at Rockler. LOL. But I certainly understand! :)

Older: "Dust Collection with Many Drops" Newer: "YouTube Thumbs Down"