Older: "One way to add Info and Warning ..." Newer: "Woodworking and ADD (redux)"

I just passed 50,000 subscribers a few hours ago. Amazing. Thank you everyone! And my video on CutList Optimizer has over 50k views in less than a week, 99.6% likes vs. dislikes, and over 470 comments. For my videos, that’s about as good as it gets in less than a week. I expect it to continue to do well, until YouTube decides they don’t like me anymore. Read on for an explanation.

Here’s the analytics for my SawStop Saved My Thumb! What Happens Next? video, which I released on March 28th (I trimmed the middle of this chart for better readability, but the trend is obvious): 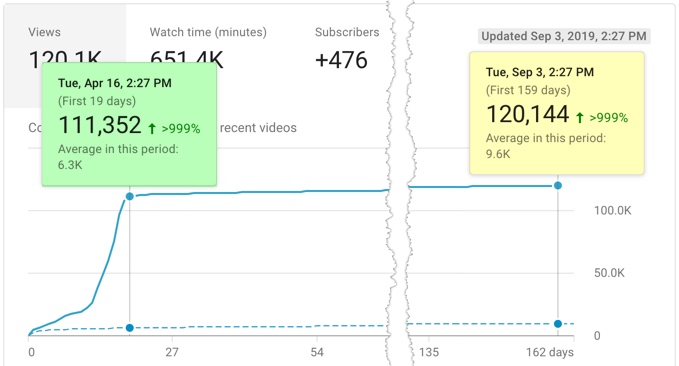 What happened on April 16? YouTube decided not to promote my video anymore.

How do I know it’s not just that my video started performing poorly?

Well, first of all, look at the above chart. That’s not really statistically probable, barring outside influences.

Secondly, check out this chart: 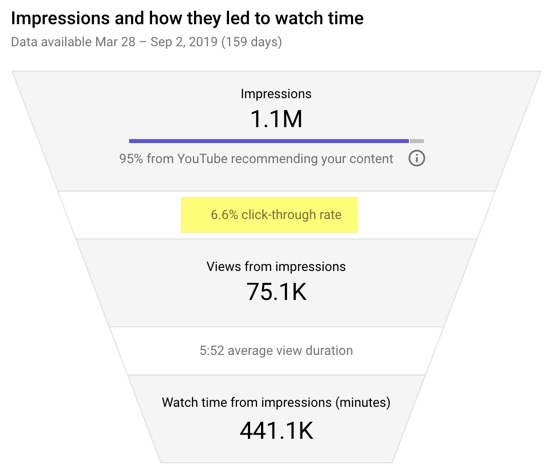 “Impressions” is when people see my video on their home page or in the list of other similar videos. I’ve highlighted the relevant number in yellow.

6.6% of the people who saw my thumbnail clicked on it to watch the video. That’s a really good number. Anything above 5% is really, really good.

So basically, YouTube decided on April 16th that I’d had my moment in the spotlight, and enough was enough.

I wonder when YouTube will do the same with this video? It’s only frustrating because I have no control over it. And also, I see the videos YouTube keeps recommending to me - the same ones over and over again, even if I’ve watched them before. Surely they can do a better job?

Anyway, it’s been a good week. Time will tell what next week holds.

Older: "One way to add Info and Warning ..." Newer: "Woodworking and ADD (redux)"